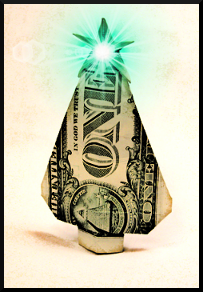 I’m doing what must be the most premature month-end financial summary ever done, a whopping 12 days sooner than the regular schedule.

Seriously, though, this is part of my plan to go offline for about two weeks.  No blogging, no forums, no news-checking, no screen-time, period.  I do this every year during the holiday season.  It helps me to remember what life was like before we were perpetually connected to everything.  And this is the only time of the year it’s possible for me to do this, because I’m completely off work for the duration.

Don’t get me wrong — I loves me some internet.  But it’s a drug, and much like cocaine, if you do it every day, your nose starts to bleed and you can floss between the hole in your nasal wall from the slow and steady chemical burns against tender flesh.  And we all know that Nostril Flossing is Not A Great Thing unless you like totally freaking your parents out once in a while. Which I do!  Just not around this time of the year.  My dad deserves some respect, dammit.

I’m not backing down off of this analogy, even though after re-reading it, it is starting to make less and less sense, and maybe even makes me look a little insane or drug addicted, both of which are not true.  Probably.

Look, bottom line, I like going off grid once in a while.

Yes, my premature expense reporting is forcing me to estimate a few expenses for the final two weeks of the month.  Brace yourself, here comes unfiltered excitement in the form of charts containing numbers.

I’m at a 27K annual spend rate in my current residence.   Considering PITI is close to 14K of that, my actual spend is about 13K.  This is pretty OK with me.  I think it’ll be just a tad lower after RE, as some of the costs are directly or indirectly related to working.

I will be doing another post in 2015 which summarizes the yearly spending and projects things a bit into RE life — it’ll be the first post of the year.  I’m curious to map things out a bit into the future.  I’ve also missed Vanguard expenses when doing my monthly summaries — these will be included in the final reckoning.

Markets have been up and down a lot over the last two weeks.  It’s fine – part of being 70% in stocks is knowing that things are turbulent sometimes.