Oh God, no.  Please tell me we don’t have to use a lot of charts in this post.

Ahh, simulators.  Every aspiring early-retiree has played around with online calculators that tell you whether or not you have enough money to retire.  But only a couple of them are actually useful.  Let’s explore some simulators and their relative value in predicting success or failure.

Sample info, to be used for the rest of this post.

Also, have your asset sheet available.   Mine looks like this:

We simulate because we want to know whether or not we’ve built up sufficient resources to consider retiring.  In addition, anticipating various scenarios will help us accept and cope with different outcomes — some of which we will surely see during our lifetimes.

The only two calculators I use are 1) FireCalc (cFireSim) and 2) Monte Carlo.  I’ll explain why in a moment.

Most calculators are formula-driven.  The way they work is a simple equation:  if you earn 4% annually on your investments and you spend X, you will or won’t be losing value on principal year over year. Anyone who follows the market knows how ridiculous this is, though, because real-world performance is not the same over each twelve month period — it’s extremely volatile. Down 5% one year, another 11% drop the next, then suddenly up 25%.

FireCalc and cFireSim try to fix this problem by instead looking at all periods in available market data.  There are 113 years of historical market data, and it will tell you, given X assets, if you retired in any of these years, whether or not you would have run out of cash.  You can think of it as extension of the Trinity Study but with some key differences:

For the purposes of this post, we’re going to use cFireSim and I recommend you do the same, for a few important reasons.

I run it with the following inputs: 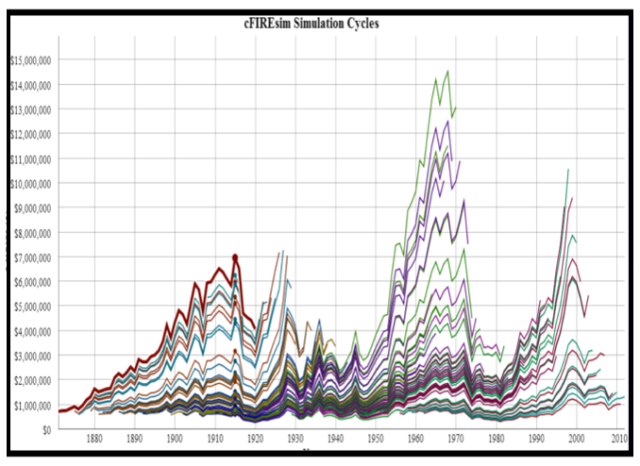 Challenge:  Come up with a funny caption for this graph.  I couldn’t.

This is about as good as it gets.  Moving on to the other type of calculator worth using…

Description:  Predictions based on aggregating thousands of brute-force random simulations.

In English, Monte-Carlo simulators take your asset sheet and run simulations against a randomly selected real year of historical data — stock and bond performance, inflation etc.  For the following year, they pick another real instance of historical returns.  One simulation might use 1932 as your starting year return values, and 1984 for the second, and so on, until the number of years equivalent to the duration of your expected retirement has been reached.

The Monte Carlo approach will run multiple simulations and report on a failure percentage.

Note that although you can run the simulator repeatedly and get slightly different results due to the randomness of year selection on the simulation, the differences should be slight, perhaps a percentage or two.

Let’s use Vanguard’s simulator for this exercise.  It runs 5,000 simulations per execution cycle.  Here’s a run with my asset sheet and a 30 year drawdown period. 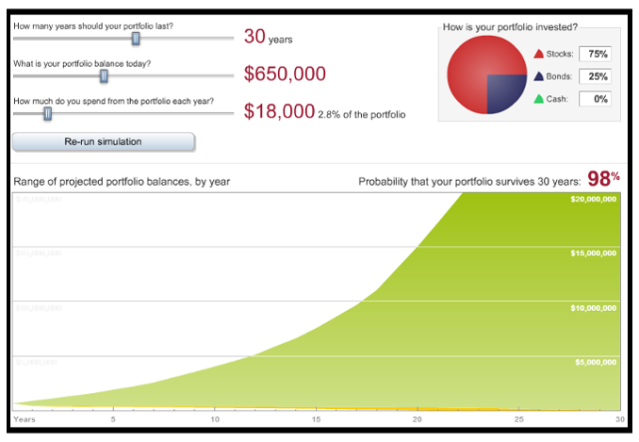 There’s no input on REIT (10% of my allocation) so I split it between stocks and bonds, making the final ratio 75/25.  Close enough.

I ran this sucker ten times and got results as low as 94% and as high as 96%.   That’s about as sure as it gets with this thing.  If you’re aiming for 100%, good luck.  You’re going to be working for a long, long time to cover a very small percentage chance of failure.

Now that you have a good idea of your success rate as determined by calculators, it’s time to confuse the issue a bit.

You’re a savvy investor by now, so you know the S&P 500 has a Schiller P/E ratio, sometimes referred to as CAPE.   This is the multiplier of the stock’s value versus the average company earnings over the past ten years.  Note:  This is not to be confused with the standard p/e ratio, which merely captures one instant in time.   Taking the average earnings helps to more accurately capture a company’s real long-term power to make money.

Super simple example:   Company X made 1 million dollars each year for the past ten years, has 1 million shares of stock, and the stock is valued at $1.   This makes each share worth 1 dollar.

If the stock was instead valued fifteen times higher (15x), then we’d say the p/e ratio for that company is one to fifteen, 15/1, because the stock is worth (“valued at”) fifteen times more than the earnings.  The company made a cool million but is valued at an even cooler fifteen.

If every company in the S&P 500 performed the same as Company X, then the entire market would have a CAPE of 15/1.

The Schiller P/E is useful because it helps us understand whether or not the market is overvalued or undervalued.  The average historical ratio is 16.5, but at the time of this writing we’re a bit over 25 — about 50% higher than the historical average.

Back to the point.  The chart above show that when the market is extremely overvalued, there’s a higher percentage chance of downward movement.  This topic was discussed in some detail on the MMM forums and the bottom line is that the results of the FireCalc/cFireSim calculators are not completely trustworthy because they fail to account for the current P/E levels.   Some of the posters shrug off P/E, instead preferring to trust entirely in cFireSim’s results, but I personally think that the data can’t be denied.  Retiring right before a major downturn is the number one reason why portfolios fail — and it’s impossible to predict.

A 6/15 failure rate (40%) for retirement periods beginning with a p/e above 20?  That’s hardly the 95%-plus percentage reported by cFireSim.

This observation is why I’ve been aiming for the very conservative 3% withdrawal rate.  It makes it significantly more likely that my plan will succeed, given that I think that the market is currently somewhat high.

See, I’m not just being conservative for the sake of being conservative.  I don’t want or need my money to multiply to the point where my house starts to resemble the Vault of Scrooge McDuck.  I simply never want to have to go back to work again unless I actively choose to do so.

By this point, we’re pretty good.  We’re sitting on a treasure trove that our simulators tell us has at least a 95% chance of funding our retirement for the rest of our lives.

But there’s still a niggling voice in the back of your head that thinks that’s not a high enough percentage.  You are smart, cautious, risk-averse, and persistent.  That’s how you’ve managed to make it as far as you have on this journey.  Why would you settle for anything less than a sure thing?  95% doesn’t sound like something you can count on entirely.

After all, this means there’s a one in twenty chance that you will fail.

Critical Attack on Your Stash!

And one-in-twenty is actually not all that uncommon.  Back in High School, I played a lot of the pen-and-paper game Dungeons and Dragons.   In that game, players roll a twenty sided die to attack something.  The roll determines success or failure:  the swing of your sword, the burst of your magic fireball. Roll high and hit.  Roll low and whiff.

But not all hits are created equal.  If you get the highest value on your role (a twenty), you’re going to be dealing massive bonus damage because you’ve landed a critical blow.  Maybe you severed the jugular of your opponent and he’s now bleeding all over the place like the black knight in Monty Python and the Holy Grail.  Or if you’re using a blunt force weapon, maybe you caved his sternum straight into his heart.  These were rare events that you hoped for on every single fling of the dice.

Here’s the thing.  Hitting on them wasn’t actually all that rare.  We rolled twenties all the time.  Over the course of an eight or ten hour gaming session, we’d attack hundreds and hundreds of creatures, and quite a few of those rolls resulted in us staring awestruck at a twenty after the die stopped tumbling around.  I’m not saying we rolled them at a higher frequency than 5%.  What I’m saying is that 5% is more likely than you think.  It totally happens.

So you need to be prepared if it’s starting to look like you’re unexpectedly on one of the roads to failure.  Have a strategy.  Make adjustments.  Don’t just blindly spend the same amount every year if the market has just shed 50% of its value.

I’ll be posting my own backup plan as a part of the next post.

This entry was posted in Finance, FutureLife. Bookmark the permalink.