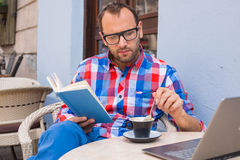 Not me. But with a little more hair, it’d be pretty damned close.

I spent yesterday morning — a weekday, a Thursday — sitting on a chair outside a cafe enjoying the last bits of warm weather in New England, just reading and doing a bit of people-watching.  Toward the end of the three or so hours of blissful me-time, I realized something startling.

You know who I’m talking about.  Don’t pretend you don’t.

I’m referring to the guy you occasionally see at your local coffee shop at eleven in the morning with flip-flops on — the one who seems like he doesn’t have a care in the world.

You wonder what’s going on there.  Can’t help yourself.  Because he’s definitely not working.  You can tell since he’s reading trivial fiction, maybe Girl with the Dragon Tattoo or Snow Crash or Clifford The Big Red Dog, and there’s no laptop to be found anywhere.

He doesn’t check his phone.  You wonder if he even has one.

You might see that guy jogging down local streets at eight thirty in the morning while you’re commuting to work.  Eight bleeping thirty!  If he had a standard 9-5 job — if he worked in an office — he couldn’t be jogging, because he’d have to be in a car or on public transit, just like you.

But he’s not.  And you notice that guy exercises without even putting headphones in his ears — without even music to distract him from his life, the way most people seem to need. He even has the nerve to smile.

I mean, who the hell smiles while they run?

Sometimes you see the same son of a bitch at three o’clock and he’s just meandering down the sidewalk, without kids or anything so you know he’s not a stay at home Dad.  It doesn’t appear that he’s doing anything at at all — he’s impossible to figure out.

You might see him when you’re on a short break from work and you’re driving down the street to run an errand before frantically returning to the office so you can check email and respond to people in a timely manner and, so you can synergize and continue to collaborate and get some face time in before you move projects forward.  If you make it back quick enough, no one will suspect you were gone.  After all, if they did, they might question your commitment to The Company.

You wonder what his story is.  He’s in his mid or late thirties — Far too young to be loaded or retired, but far too old to be living with his parents.  He must be able to take care of himself without a job. What’s the freaking deal, there, anyway?

And why does he look so.  motherloving. relaxed (!?)

You have your own ideas.  Maybe he’s a bum.  Or he’s one of those lucky trust fund kids. It’s possible that guy is a lottery winner — hey, someone must be winning those things. There’s also the possibility that he’s laid off and just working through a temporary unemployment gap.

Consider the possibility, though, that none of those suspicions are true.  Because they certainly don’t have to be.

I should know.  Like I said, much to my surprise, I’ve become that guy now — and I did it by working an unspecial IT/software job, saving a lot of money, and living a normal life.  I did it by spending consciously over a decade and a half, instead of reflexively opening my wallet for every trivial want that entered my brain.  I did it by learning how to invest in the easiest, laziest, and yet most successful way possible:  Shoving a high percentage of my earnings into index funds and waiting for the stash to compound over a bunch of years.

I did it by achieving financial independence.  Anyone with a decent paying job can do the same without too much trouble.

The next time someone sees that guy or gal, it could be you.

72 Responses to That Guy