The Job Experience, StartupVille: Years #9 and #10 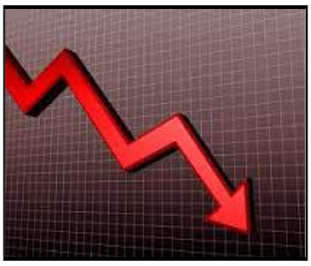 In 2008, the US stock market pretty much immediately starts going to crap.

This doesn’t really bother me.  I have my strategy, which amounts to buy-and-hold index investing, and I figure, Great! Stocks are on sale.   But I’m about the only one who feels this way.  Most people at work alternate between being pissed, depressed, and exasperated about the whole thing.

Here’s why.  When the markets head south, company valuations go down.  This makes them cut back on spending.  The last thing any company wants to do is buy a new, unproven product when budgets have been tightened.

As a result, our sales pipeline evaporates practically overnight.  We made two sales throughout the entirety of 2008 for a total of perhaps 120K in revenue over two years.  This does not cut it for a company that has to make payroll on about 30 employees with an average salary around 70K.  Mr. Math says this means we’re burning about 2.5 million a year after also including benefits and facility costs.

In the middle of 2008, the company direction suddenly changes.  Originally, our executive team was trying to simply drive sales and become profitable.  Now, though, the original vision looks more and more like an Impossible Dream.  They make a sudden course correction, and instead try to sell the company to the highest bidder.

Toward the end of 2008, one company — our primary competitor in the market space, actually — became fairly interested in us.  And why wouldn’t they?  If they owned StartupVille, they could root through our technology, take what they like, and then destroy the rest with laser beams and thermal detonators.

But their offer came in low, so after two months of intense evaluations and scrutiny, they walked.

By the beginning of 2009, things are getting desperate.  Almost everyone in sales is canned.  Two of our dead-weight engineers are fired.  Three other people manage to find new jobs despite the bleak employment market and gleefully jump off of StartupVille’s sinking ship.  Everyone is worried that they’re going to be the next to be let go, or, worse, that their next paycheck won’t clear because the company’s run out of money.

It’s become a rather grim place to work, morale-wise, and this change in atmosphere affected people very differently.

Five of our engineers are Indians — like from India Indians, not the kind that we create offensive sports team logos out of.

And they’re in the United States on work visas — H1-Bs, to be exact.  If they’re laid off, they have 30 days to find a new employer to sponsor their visa, or risk having illegal status.

In the current economic climate, the prospect of finding alternate work is daunting.  In other words, these guys are terrified of the company going under, but there’s little they can do about things.

They’re visibly skittish on a day to day basis, and can be observed talking with one another in hushed tones.  I think the unstable state of the company was the hardest on folks in this category.

A small number of people have been with the company from the early days, when it was founded back in 2004.  And they’re seriously bummed — not just because the company might fail, but also because of changes in the type of work they are being asked to do.

When I was first hired, the veteran guys were still working hard to create new features to satisfy marketing and sales requirements.  This is about as good as it gets for an engineer in terms of job happiness.  They get to use their intellect and creativity to design something that’s never been designed before and integrate it into the rest of the system.

But now that we’re no longer trying to sell, because the focus has shifted from making sales to trying to get purchased by a bigger company, there’s no longer any driving need to add new features.

Instead we’re working on stabilizing the software, cleaning things up, making cosmetic changes to beautify the user interface and help the app ‘show’ better.

From an engineering perspective, this is sort of like being forced to switch from building houses to deciding what color to paint them.  Home decorating doesn’t hold an engineer’s interest for very long — our veteran guys grew bored and restless rather quickly.

Because the company isn’t trying to sell anymore, he simply has nothing to do.

The highlight of his day becomes lunch.  Every day at 11:45 on the dot, he’d walk around the office and gather a group of people to go out to eat at a local restaurant or the building cafeteria.

I didn’t talk to him all that much, but he sure didn’t look happy most of the time.  How would you feel if all of your teammates were laid off and you were the only remaining employee on a team of one?

And, further, you were bored out of your skull?

Probably not so good.

There are four executives at StartupVille.  Many of them only come into the office a few days a week, so it’s a rare thing to catch a sighting of one of them.  When you do run into one, they turn their eyes and quicken their gait to get by you without striking a conversation; they appear to be intentionally avoiding the employees.

My personal theory is that they felt embarrassed about the state of the company and didn’t know how to discuss the future ahead with their directs without revealing one secret or another.

It was a weird dynamic.  These were the same Go-Team-Go, Rah-Rah individuals who excitedly gave sales presentations and tried to fire employees up for the entirety of 2008, and then practically overnight they’d turned from cheerleaders into the walking dead.

I’m totally fine.  I go in to work every day with a smile on my face.  I’m the antithesis of crappy morale — I’m super-powered optimism and happiness.

On days when I didn’t have enough to do (many of them), I’d walk around and shoot the breeze with people. I also created a standing 3PM meeting in the kitchen for tea and conversation — in Outlook, no less, to make it official.  And I’d gently rib people when they were unable to make it.

How could you have a conflict?  What could possibly be more important than Tea Time?  Like, with crumpets and stuff?  This is CRITICAL BUSINESS and it is mandatory that you attend and enjoy yourself!

I’d like to think this contributed to holding the team together through these dark days.

What was it exactly that allowed me to be so supportive?  Why was I so happy?

Because of the power of The Stash.  I had enough in savings to last me years and years without any paycheck whatsoever, so at the end of the day, the fate of the company didn’t really bother me all that much.

I’ve probably mentioned this about a thousand times already in this blog, but it bears repeating yet again: Having a pile of money socked away is the gift that keeps on giving.

It’s the single best thing I own.

One of the most popular subjects of discussion during this period was the state of retirement.

Not early retirement, mind you, but retirement altogether.

People were checking their 401(k) balances and seeing, in many cases, values cut in half.  For someone in their 20s, this is no big deal, but for others, say, in their mid-thirties and upward, it’s fairly horrifying.  You see the money disappearing and it feels like years of your working life are being vaporized by a plasma cannon right in front of your eyes.

There were two major schools of thought on what to do:

I opened a third school, which was to stay put but also shove any additional money I could come up with into the market because, hey, it was down.

When I said this to coworkers over lunch, most registered disbelief and heavy skepticism.

Coworker A:  Where do you have any extra money?  I’m trying to build up an emergency fund for when this place inevitably goes under.

Coworker B:  The world is falling apart and you think the market is poised to go UP?!?  That’s just stupid.

Coworker C: Even considering that you do have money to invest, why would you put it in index funds?  Why not go with gold and commodity stocks like everybody else is recommending?

Coworker A, still stuck on their first point: Didn’t you just buy a house?  What are you, Mr. Moneybags?

I admit it — it did make me a little nervous. I was going against the grain.  As much as we try to honor our own intellect and rationality, the message of the herd is powerful and I felt its pull.  I began to wonder all of the same things that everyone wonders when there’s a major market meltdown and it appears that the very foundations of the economy themselves might come crashing down — I wondered if this time was different.

So here’s what I did to guard against doing something stupid.  When I felt my resolve failing, I re-read sections of Common Sense on Mutual Funds.  This never failed to give me perspective and helped me to stay the course.  It also gave me the confidence to repeat to my coworkers, day after day, the same message:  They should keep any money they have in the market and not make any moves.  As humans, we tend to overvalue recent events and undervalue history, and this usually leads to the making of mistakes.

For the record, since June of 2008, the S&P 500 has outperformed gold by about 2% annually, which may not seem like much but is actually a ton of money when you do the compounding over six years.  Note that the start date here even predates the major dropoff occuring in early 2009 which means this data includes a horrific year and a half — in other words, I’m hardly cherry-picking data to make a point.  If you had a million in the S&P 500 and left it there (reinvesting dividends), you’d have 1.53 million now, inflation adjusted.  In gold, you’d have 1.3 or so.  If you went to cash, you’d have less than a million.  Bonds?  1.21 million.

Every dollar I put in during 2009 is worth at least double that amount now.

Staying the course is the main reason I’m FI and ready to retire today.

Surviving this crash has made me confident that when the next crash comes, I’ll do the same thing.

And you should too.

19 Responses to The Job Experience, StartupVille: Years #9 and #10