Top Zero Things I Learned From a Financial Planner

Last week, I met with a certified financial planner (CFP) to discuss my impending early retirement.

My employer offers their minions free sessions with these supposed financial wizards.  The goal?  To help folks pave the way for a well-funded exit from the working world at the standard age of 65.

As someone who believes everyone should manage their own finances, I’d never before met with a planner or adviser of any kind.  This is mostly due to the fact that these folks have a potential conflict of interest — they can (and do) make money by providing advice that benefits them rather than their clients.**

CFPs in particular are obligated to “at all times place the interest of their client ahead of his or her own.”  Still, within that requirement, there’s room for advisers to skirt around the ethical line, occasionally resulting in sub-optimal or even downright bad planning for the individual.

At any rate, my primary motivation for having a consult was to review my own plans to exit the working world with a professional.  You know, as an information-gathering experiment, or, as the kids say, “for kicks.”

In addition, I wanted to demystify the experience.  Most of the financial books I’ve read discourage the use of advisers or brokers. While I’ve always agreed with the basic logic behind this advice, I won’t attempt to hide my curiosity: I wanted to understand exactly how these types of meetings go.

I held a few assumptions going in — that this person would do the following very uncool things:

Let’s see how he did. 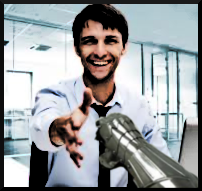 How about a fist bump?  Can we do that instead?  A fist bump for Doom?

I walked into a company office where my adviser had taken up temporary residence.

He rose to greet me.  I noticed he was slim and dressed conservatively with a collar shirt and tie — no jacket.  Couldn’t have been older than 30.  When I shook his hand, it felt a little limp, but he looked me right in the eye and introduced himself.  He seemed confident enough.

We sat down and shot the breeze for two minutes.  What department do you work in. How long have you been with the company.  Sure is cold out, isn’t it?  Yep, it sure is. Blah, blah.  The usual.

Finally he cut to the chase and asked my reasons for scheduling the appointment, and I told him that I wanted advice on my retirement plan.

He says great!  That’s what he’s here for.  How far along in the process am I?

To his credit, after this initial burst of surprise he calmed down quickly and ran me through the standard process.

We’ll see about that.  Fidelity has some calculators that will take your numbers and provide a report.  Do you mind working through that exercise?

That sounds perfect – it’s what I’m here for.

This brings us to… 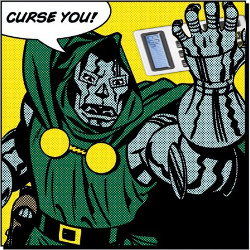 If the calculator doesn’t tell you what you want, break it.

Over the next ten minutes he plugged my financial data into Fidelity’s retirement application.

Instantly his computer screen pops up a chart that indicates overall success. 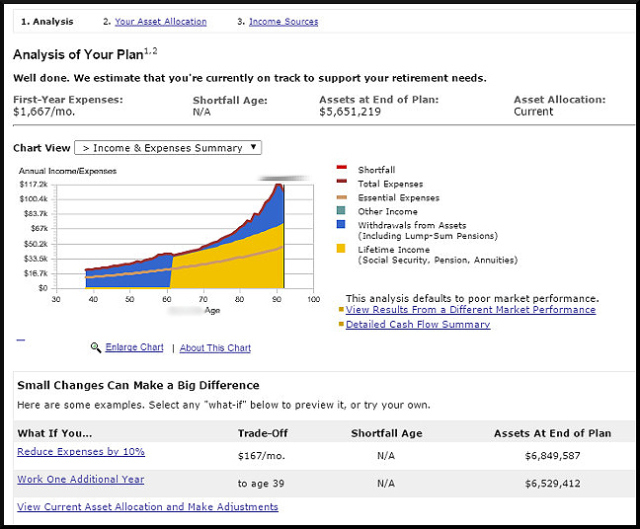 Note: The Fidelity calculator “defaults to poor market performance.”  My adviser couldn’t tell me exactly what this meant other than, quote, “in 90% of the historical market scenarios run, the asset allocation performed at least as well as the results shown.”  So it’s a modified history-based calculator — probably not all that different from cFIREsim underneath the hood.

I asked him to run the numbers again, this time without any social security benefits whatsoever, and the calculator still returned a successful report, albeit a shakier one.

I’ll also point out that he wasted a couple of minutes of our time questioning my spend rate.  He simply couldn’t comprehend that I spent less than 20K/yr on myself, even after I explained that this figure assumed a paid-off residence and relatively low taxes, and, by the way, it’s just me — one person.  My wife has her own asset sheet and will be executing a somewhat different plan — she has a rental property and a pension.

Moving on. He asked me how I planned on accessing my retirement assets prior to age 59 1/2 and I went over the Traditional IRA-To-Roth Pipeline Strategy detailed in my blog.  I also explained that I’m holding about 3 years of living expenses — a current year in cash and the other two in laddered CDs.

My adviser said that he only recently heard of the pipeline method but agreed that it would work just fine and help keep my tax burden low.  He also mentioned Substantially Equal Periodic Payments (SEPP) AKA 72(t) distributions as another way to tap those retirement funds.  SEPP could function as a partial backup plan in the unlikely case that laws behind the pipeline strategy become invalidated.

Next, he voiced concerns about potential inflation.  I explained that investing in the stock market is a partial hedge against inflation.  At the very least, it’s better than holding mostly bonds, which usually fare worse in high inflationary environments than ETFs.  Besides, if the U.S. undergoes hyperinflation, like Germany did in the early 1920s, no retirement plan will be safe.  On that, we both agreed.

Next subject:  Health care.  I said I’d get on the ACA (“Obamacare”) and take a cheap high-deductible plan, and he said:  OK.

We talked about the safe withdrawal rate as well.  In his opinion, the real SWR for a 70/30 stock/bond split was about 4%.  At this point I agreed, mentioning the Trinity studies, but much to my surprise he said he’d never heard of them.

Still, in the end, he cleared me to quit.  I was absolutely floored.  When I came into the meeting I thought there was no chance in hell that a rep from a financial company was going to say it was perfectly fine for me to retire, and yet that’s exactly what he did.

But he wasn’t quite done yet. 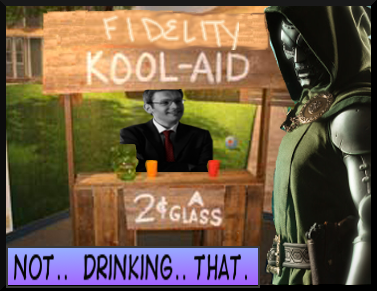 At this point, we’re about half an hour into our meeting, and I figure we’re done —  I’m getting ready to leave.  It is precisely at this moment when he tries to sell me stuff.

That was about all he could think to offer me for the day, which was fortunate, because I was getting ready to tell him to shut the bleep up. 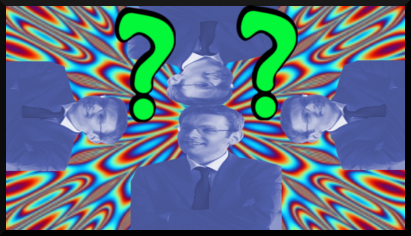 So we’re forty five minutes into the meeting, leaving us with at least fifteen minutes to kill prior to his next booking.

It’s here that he embarks on the third part of our conversation:  The One Where He Tries To Give Me Insane Advice.

I couldn’t help myself:  I challenged him on these ideas, telling him that I disagreed. Bucket creation is essentially timing-by-decade.

The only reason you’d want to hold cash for the first ten years, for example, would be because you believed that the markets would be flat or negative over that period. Following your so-called beliefs and whims is precisely the opposite of index investing. You are instead following a hunch.  I informed the Fidelity rep that no amount of hand-waving would make me accept that his suggestion is anything other than an attempt to predict the future and therefore time the market.

As an added negative, if you take this approach, you’re invalidating the results of history-based calcuators like cFIREsim or FireCalc because you’re breaking their assumptions — namely, that you have a single allocation and you stick to it over the specified duration. Like I said:  Very Bad.

So I pressed him:  I asked him to tell me how his bucket idea mapped to the Fidelity Retirement Planner tool that we just used to green-light me.  Was that calculator aware we might be taking this approach?  Could we configure it to change the model to something closer to funding-by-decade?  Answer:  No.

At this point he conceded, advised me to stick to the plan I’d already created, and shooed me out of his office. 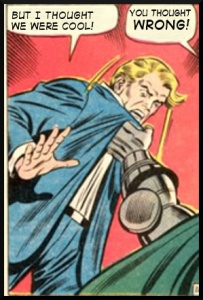 First, let’s look back at expectations.  I assumed that he’d a) tell me I couldn’t retire, b) sell me stuff, c) express skepticism regarding the Roth pipeline method and d) suggest a rollover of my assets into Fidelity’s funds.

The only surprise was on a) retirement approval.  He agreed that I could go ahead and pull the plug on employment.  This shocked me because it’s not in Fidelity’s best interests for anyone to retire. Obvious: They make money holding your assets.  They don’t want you to spend a dime.

Still, he did try to sell me stuff, did recommend a rollover into Fidelity, and did have some doubts about the Roth pipeline method — namely, whether or not it could be counted on indefinitely.  (This is, to be fair, a valid concern.)

A couple of other final thoughts:

I’ll grant him this:  For an unsophisticated, unmotivated investor who had no interest in learning personal finance or retiring on the early side, his advice would have been perfectly acceptable.

But that doesn’t meet the description of readers of this blog, who are extremely smart and want to be in control of their own assets.

Bottom line:  I haven’t missed out over the past 15 years of my investing life by not having someone tell me what to do with my earnings.  In fact, the opposite is true:  I’m richer, because I haven’t been paying bloated expense ratios over the years.

So when it comes to getting an adviser, just say no.  Chances are, you’ll end up richer, too.

** CFPs are required to keep your interests at the forefront of any and all discussions.   This is different than a broker, for example, or a straight-up investment adviser, who might have much more significant conflicts of interest. Even so, I found this particular rep was applying ‘spin’ in an attempt to get me to move funds into Fidelity, which was frankly not in my best interest.

***If you’re not sure about the distinctions between different types of advisers and you are, against the advice of this post, seeking one, please read up on them and be safe — and skeptical.

****After our meeting, I followed up on the statement re: Fidelity’s expense ratios being more competitive lately.

Discovery?  Utter bullshit.  FFKFX is .66%, VFORX is .18%.  On 500K of assets, that .48% difference amounts to nearly $2,500 a year.  In addition I found that FFKFX is actively managed; Fidelity doesn’t offer passively managed (indexed) target retirement funds as of this writing (Jan 2015).  This means that this fund will frequently under-perform its market benchmark — and indeed, it did last year, earning 5.5% when it should have earned 7+.

***** I’m sure there are some genuinely great CFPs out there who always work in the best interests of their clients.  If you’re one of them, that’s terrific – the world needs more of you and less of the kind that likes to play with ethical boundaries.

This entry was posted in CurrentLife, Finance, FutureLife. Bookmark the permalink.