If your employer doesn’t grant your request for a year off, follow Wally’s lead and take ‘in-cube’ paid leave. Genius!

I’ve recently realized that I should have taken significant time away from work prior to retiring instead of slogging straight through my career since graduating from university, 1999 to 2015, with hardly a letup.

Why have I come to this conclusion?  What are the benefits to taking a gap year, or half-year, along the journey to financial independence? What is it about experiencing life away from the office that’s convinced me that I waited too long to take a significant reprieve — and why didn’t I do it?  What does it do to the financial picture? And finally, what about the logistical challenges — how might you pull it off, if you’re so inclined?

If you’re interested in taking a non-working sabbatical within the context of FI/RE, this post is for you.

Taking The Year Off :  Pros

Let’s say you’ve been working for ten years, the past five of which you’ve been aggressively saving in order to pursue your retire early plans.  Your savings rate is an awesome 66.6%, putting your Time to FI at ten total years according to NetWorthify.  (This assumes a 5% dividend-and-inflation adjusted return on your investment and a 4% withdrawal rate.)

Since you’ve already been saving for five, you estimate you have five remaining years to work before you’re completely financially independent and can pull the plug on formal employment forever.

What reasons could possibly be good enough to justify taking this particular time to take an extended period away from work?  How can you justify prolonging the realization of your dream to achieve financial independence and travel to Quitz-ville?

Get ready for a wall of text containing thirteen.

Taking The Year Off :  Cons

Ahhh, the negatives:  There are some.

Financial Implications of the Gap Year

So what does taking a full year off really do to the finances?  Let’s continue the example above.  Remember, you have a 10 year plan to FI based on a savings rate of 66% and expected returns of 5% — and you’re 5 years into it.

Let’s nail down some concrete numbers to help with the exercise.  Again, for simplicity’s sake, we’re assuming 5% inflation-adjusted (linear) growth of investments and a 4% withdrawal rate target, which is generally considered to be safe.

That slowly growing red line is your expected 5% investment returns per year.

But remember, we’re talking about taking a gap year, starting in Year 6.

At the end of year 6, your net worth is now 362K.  You go back to work, earn the same salary, and continue to save two thirds of what you make.

When will you be able to retire?  What effect did these shenanigans really have on your grander plans?  Let’s plug the data into excel to generate an updated chart. 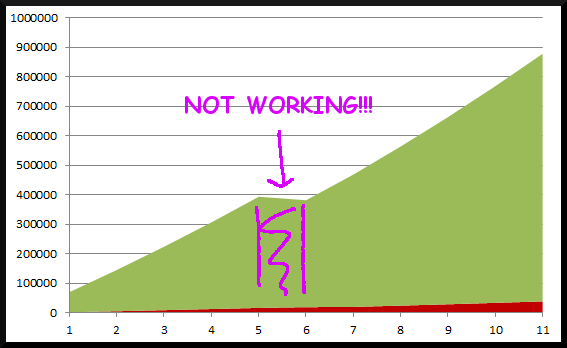 Meet the 11 year chart: The same as the 10 year chart, but with an extra year.

Fact:  Your updated plan will take you a full 11 years to get to FI instead of (instead of 9.8), but keep in mind you have one of those years entirely off.

Taking a year off in the middle of a 10-year FI plan doesn’t make you work much longer — you’ll have to put in about three extra months’ worth of duty to make up for the cost of getting a good blast of freedom a bit earlier than your original plan.

Mess around with the calculators at networthify.com to see what effect taking a year off might have on you.

So let’s say you are seriously interested in taking off for a good long while.  How do you do it?

You have two top-level choices.  Option 1 is to simply quit, with the understanding that you will look for alternate employment once your gap year is over.

Option 2 is to negotiate a leave.

Here are the basics:

Get over yourself, Doom.

Congratulations.  If you’ve made it this far without quitting the post, you either have a naturally fine attention span or you have taken your ADHD medication. As a reward for your efforts, you will now be subjected to an incoherent brain dump.  (You’re welcome.)

I’m pretty close to that 15 year example scenario I’d outlined above.  Worked close to 16 years in my industry, the first three-plus of them a spender and the final 12-ish a hard-core saver.

At the end of 2010, I left a tough employer — a stressful position as an engineering support rep at a MegaCorp.  By this time, my FU money was even solid-er.

In hindsight, this would have been the perfect time to take a gap year.  I was going to leave that job no matter what.  And when you absolutely need to leave a job, you don’t have to work through the song-and-dance required to negotiate a sabbatical.  It simplifies everything: You quit, you don’t go back to work, and suddenly you have loads of time to decompress, to explore, whatever!  When you want a job again, you start to look for one. It’s easy like Sunday morning.

And I wanted to.  Truth is, the thought more than just crossed my mind.  I knew I was burnt, crispy-style, like black bacon.  I knew that taking time off would help me to more accurately picture my future life without any work whatsoever.  I knew most of the pros listed in the opening sections of the post — that I’d detox from work, that things would look different after an extended period away, that I could afford it, and so on.

But I didn’t seriously explore it anyway.  Nope!  Instead I just launched myself back into the working world, and wound up taking a rotten position in a startup that probably took 12 parsecs off of my life.

Here are the five major reasons that I was able to pin down:

I worried a lot about becoming obsolete if I took any time off from my career.  It was a ridiculous concern, given how in-demand folks with my skill-set are — the software industry is hot.

But I couldn’t shake it.  I thought no one will want to hire me with a full year off in my resume.  (Wrong, for sure.)  And I also thought:  I will fall behind in the industry — I’ll miss out on new technologies, get behind the tech curve, become unemployable.  (More bone-headed wrongness, of course.  Smart people will actually turn the year off into an asset.)

Back then, I didn’t do the math on taking a year off the way I did in this post. I probably should have.  Because instead I envisioned myself losing a massive amount of ground in my quest to become financially independent.  As it turns out, I would have lost very little. I’m not sure why I didn’t see it.  Probably willful blindness.

I didn’t feel like I’d prepared enough for a lot of time off.  Just as stupidly, I felt as though preparation was necessary.  It wasn’t.  I wish I had a good friend to push me off the fucking job-plane-train-and-automobile back then.  I would have been absolutely fine.

Over the years of working, I’d become tougher, and took ridiculous cave-personish pride in my ability to put up with challenging conditions.  I have to admit, when I thought about finally giving myself what I wanted (i.e. to take some serious time off), there was a very loud inside voice that told me I was a weakling, that a quote real adult endquote would just keep on trucking until completing the job of reaching FI.

#1 Fear of Not Wanting to Return to Work, Ever

Somewhat paradoxically, given my fears of not being able to find employment after the break, I was scared that I wouldn’t be able to force myself to go back.

In actuality, that last insecurity was my only legitimate concern.  I mean, I saw myself taking the full year off and, at the end of twelve months of freedom, being unable to re-fasten the dog-collar, so to speak.

Turns out, this particular fear is precisely the reason I should have left.  I’ll explain.

If you read this blog at all, you’re probably aware that I had a surprisingly difficult time actually quitting when the time came.  Even after settling the finances and coming up with a comprehensive plan to leave my employer, I waffled. My mind was awash with fears and anxieties.  I even felt, occasionally, guilty about leaving — there was a bit of Stockholm Syndrome mixed in with the madness.

I’ve come to believe that the reason I had such a hard time leaving was because I didn’t take a long break between starting full time employment and terminating it.  Somehow I’d become partially institutionalized myself, despite making a continual effort to keep my eyes as wide-open as possible during the cubicle-laden journey to early retirement.  I came to rely on my employer almost as much as they relied on me.

Because a decade and a half is a hell of a long time to be doing the same thing without a letup.  During that interval, I’d become used to not thinking for myself. What am I going to be doing today?  Don’t have to consider THAT question too carefully — I know I have to drive to the office, and I know after that I’ll be checking my email, and after that I’ll just be prioritizing Stuff That Must Be Done For The Company.  By the end of the day, I’d be so tired that I deserved to do nothing, to watch reruns of Everybody Loves Hypnotoad, for example, instead of actively thinking about much of anything at all.

Taking a full year off mid-way through would have likely broken that spell and allowed me to avoid much of the tumultuous waffling that came at the end.

My zombie-like sleepwalking through the workplace routine of days and weeks and months would have been shattered.

My sense of individuality and autonomy?  Restored.

And I would have felt much, much more confident about leaving my industry for good when the time eventually came.

Not only is it completely possible to take a break from the grind, it’ll barely impact your FIRE plans.

**Before I end this post, I want to point out that Doug Nordman over at The Military Guide to Early Retirement had similar thoughts when reviewing his own journey. Specifically, he lamented not slowing his career down earlier and taking alternate opportunities, blaming the so-called Fog of Work for his inability to change course and chart a better path to the end.  Instead, he “bulldozed all the way through to 20 instead of transferring to the Reserves at about the 12-year point.”

So I submit that it’s our tendency as people to simply run full speed to the end of the race (regardless of how tired or injured we are), instead of slowing down and re-assessing as we go.

** Some bonus links if you’re seriously interested in taking a leave from your employer.

CareerShifter’s Advice on Taking a Sabbatical

A Few Real-Life Stories (although not written from the context of FIRE).  And a terrific, detailed blog post from someone who took a full year off with his family.

53 Responses to Taking a Gap Year